The parish census is almost complete. The form has been mailed to all parishoners but is available by clicking here. Please return the form via mail, drop off in the collection basket or at the parish office. If you have any questions, please feel free to contact the parish office.

Event is open to the public but you must sign up!

News from the Vatican

Unfortunately, no parish festival is scheduled for 2023.  Would you be interested to help plan for 2024?

If so, please contact the parish office.  Volunteers Welcome! 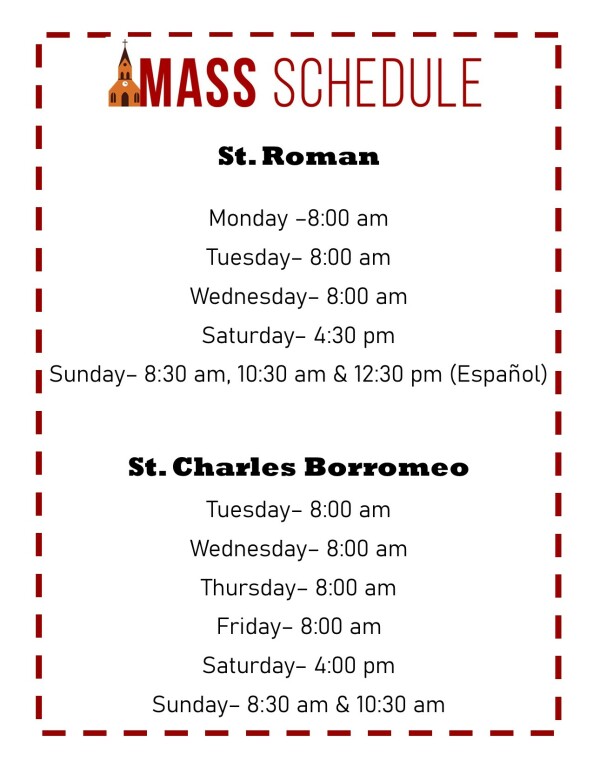 Who is St. Roman?

Did you know that August 9th is the Feast of our patron Saint?  St. Roman is relatively unknown.  We do not know his actual name.  He originally was referred to as the Roman Saint and later the name just reversed and became St. Roman.

He was a policeman, correctional officer, civil servant, who was serving in Rome at the time when St. Lawrence had been imprisoned for his refusal to surrender the treasury of the Roman Church to the Empire.

As Roman beheld the endurance and fortitude of St. Lawrence during his persecution and marveled at his virtuous courage and heroic patience, St. Roman was so inspired that he approached the Holy Martyr and asked to be received in the Faith.  St. Lawrence first gave the necessary instructions to St. Roman and then he baptized him in the prison.  This brave young man then publicly proclaimed his conversion to Christianity to his fellow policemen, and he was immediately arrested and convicted.

St. Roman thereupon received the crown of martyrdom by being beheaded on August 9, 258, the day BEFORE the execution of St. Lawrence.